It is not until his imprisonment for anti-government activities and the consequent dispersion of his flock that the Coconut Monk (Dao Dua) led a small community on Phoenix Island (Con Phung), a few kilometres from My Tho. The Coconut Monk left his family behind to  pursue a monastic life and  for three years he sat on a stone slab under a flagpole and meditated day and night.

In its glory days  the island was dominated by a somewhat trippy open-air sanctuary (admission 5000d;  8-11.30am & 1.30-6pm). The dragon-emblazoned columns and quirky tower, with its enormous  metal globe, must have once been brightly painted,  but  today the whole  place has become faded, rickety and silent.  Nevertheless, it is seriously kitsch, with a model of the Apollo rocket set among the Buddhist statues. With some  imagination you can  almost  picture how it all must have appeared as the Coconut Monk presided over his congregation, flanked by enormous elephant tusks and seated on a richly ornamented throne. Plaques on the 3.5m-high porcelain jar (created in 1972) on the island tell all about the Coconut Monk. He created  a religion, Tinh Do Cu Si, a fusion of Buddhism and Christianity. Representations of Jesus and the Buddha appeared together, as did the Virgin Mary and eminent Buddhist women, together with the cross and Buddhist symbols. These days  only the symbols  maintain ,  as the Tinh Do Cu Si community has dissolved from the island.

There is private boat operators that can include  the island as part of  an organised tour.  It’s possible to  spend the night at the  simple Con Phung Hotel ( 075-382 2198; www.conphungtourist.com; r from 200,000d). There are river views in the VIP quarters , but almost every rooms   are equipped  TV, fridge and hot water. The restaurant also offers  a  variety  of delta-flavour dishes (mains from 40,000d).

It takes travellers only five minutes from My Tho to get to Dragon Island (Con Tan Long), which is famous for its longan orchards and makes for an enjoyable stop and stroll .  Some of the  residents of the island are shipwrights, and the lush palm-fringed shores are lined with wooden fishing boats. The island has some  small restaurants and cafes. 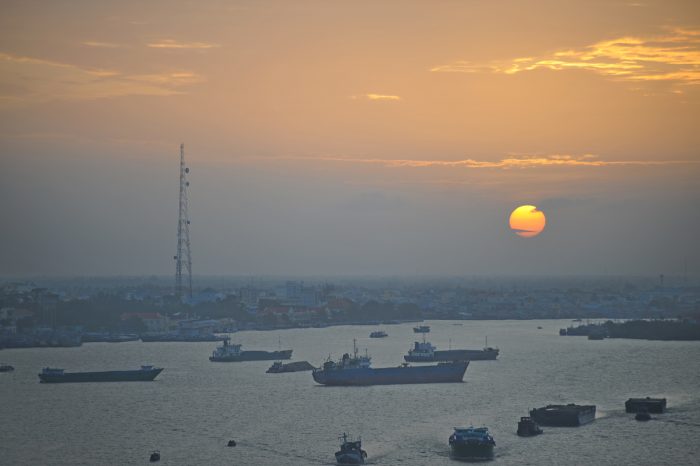 Across the river in Ben Tre province, this former ferry stop has faded into obscurity with the opening of the new bridge. The only  reasons to  visit are to chill out in its rustic guesthouse or to visit its riverside restaurant – a popular stop on the river tours.

Tan Thach, which is 6km north of the Ben Tre bus station (30,000d by xe om), is a part of ; take Hwy 60 back towards My Tho, veer right at the large  intersection marked Chau Thanh and follow it to the end. The last narrow road to the right is the guesthouse and restaurant ; Thao Nhi is signposted to the right after 300m, at which  it’s a further 50m down a small lane.