A thriving port on the Gulf of Thailand and something of a southern boom town benefiting from a serious injection of Viet Kieu money, Rach Gia is home to great  numbers of both ethnic Chinese and ethnic Khmers. Most  tourists  zip straight through for boats to Phu Quoc Island,  but the lively waterfront and bustling backstreets are worth being explored.

With its easy access to the sea and the proximity of Cambodia and Thailand, fishing, agriculture and smuggling are profitable trades in this province. The area was once famous for supplying the large feathers used to make ceremonial fans for the Imperial Court.

(18 Ð Nguyen Cong Tru) This temple is devoted  to Nguyen Trung Truc,  a leader of the resistance campaign of the 1860s against the newly arrived French. The first temple structure was a simple building with a thatched roof; over the years it has been  enlarged and  rebuilt  several times. There is a portrait of Nguyen Trung Truc on an altar in the centre of the main hall.

Among other exploits, Nguyen Trung Truc led the raid that  resulted in the burning of the French warship Esperance. In spite of  repeated efforts  to capture him, Nguyen Trung Truc continued to fight until 1868, when the French took his mother and a number of civilians hostage and threatened to kill them if he did not surrender. As a consequence  Nguyen Trung Truc turned himself in and was executed by the French in the marketplace of Rach Gia on 27 October 1868.

(Chua Phat Lon; 151 Ð Quang Trung) This large Cambodian Theravada Buddhist pagoda, whose name means Big Buddha, was constructed  in the 19th century. Even though all of the monks who live here are ethnic Khmers, ethnic Vietnamese also frequent the pagoda. Inside the sanctuary (vihara), figures of the Thich Ca Buddha (Sakyamuni, the Historical Buddha) wear pointed hats. Prayers can come here daily  from 4am to 6am and 5pm to 7pm. 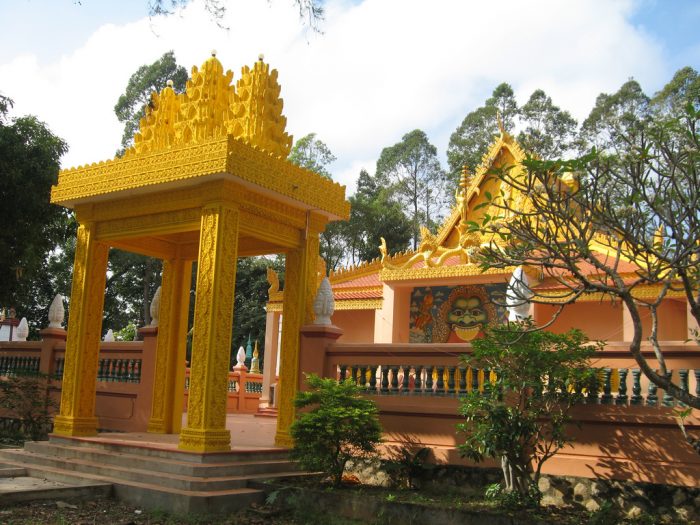 (21 Ð Nguyen Van Troi; 7.30-11am Mon-Fri & 1.30-5pm Mon-Wed) Housed in an ornate gem of a French colonial-era building (once a private house), the collection here includes many  war photos and some Oc-Eo artefacts and pottery.

(2 Ð Nguyen Trung Truc; mains 60,000-120,000d; 6am-10pm) This is a great restaurant by local standards with a great location by the Cai Lon River. Seafood is popular, consisting of crayfish and crab, and Western-style dishes also remarkable.

(28 Ð Le Thanh Thon; mains 25,000-60,000d) Convenient for the bus station hotels, this is lively by night and does   inexpensive molluscs –  such as shrimp, snails, blood cockles and the like.